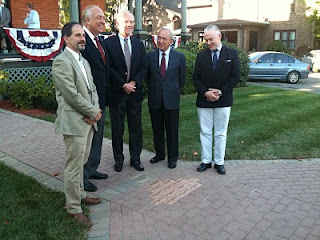 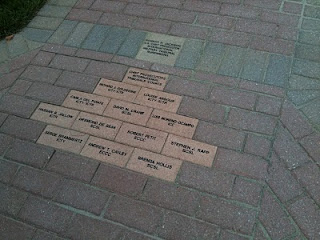 Every year at about this time, prosecutors of the international criminal tribunals - past and present - meet at the Chautauqua Institute, together with academics and other specialists, in upstate New York for a few days of discussions. This year the theme is the crime of aggression. The sessions began last night with a visit to the Robert Jackson Centre, which is nearby. Chief American Prosecutor at Nuremberg, Jackson was, of course, one of the first international prosecutors. Yesterday's visit included a session honouring Whitney Harris, who was on Jackson's team. Whitney passed away a few months ago.
The Jackson Centre has placed bricks in the entranceway with the names of all of the prosecutors of modern times. I snapped a photo of the bricks, and of some of the prosecutors standing around them. From left: Robert Petit, formerly of the Extraordinary Chambers of the Courts of Cambodia; Steve Rapp and David Crane, of the Special Court for Sierra Leone; Richard Goldstone, of the international criminal tribunals for the former Yugoslavia and Rwanda; and Andrew Cayley, currently with the Extraordinary Chambers of the Courts of Cambodia.
Later in the evening, Fatou Bensouda, Deputy prosecutor of the International Criminal Court, Serge Bramertz, Prosecutor of the International Criminal Tribunal for the former Yugoslavia, and Bongani Majola of the International Criminal Tribunal for Rwnada, arrived. And I must also mention Ben Ferencz and Bill Caming, both of them prosecutors in the subsequent proceedings at Nuremberg, who are also with us.
Posted by William A. Schabas at 12:56