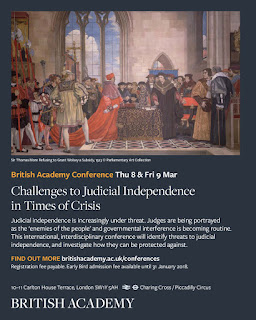 Guest post: Michael Kearney, 'Al-Werfalli and the Presumption of Innocence'

We are delighted to welcome Dr. Michael Kearney, Senior Lecturer in Law at the University of Sussex, for this guest post.

In welcoming students to a black letter international crimes module, one of the initial, contextual, points worth emphasising is that since the individuals brought before international courts do tend to have been obviously responsible for serious crimes, we have to double down on our commitment to the presumption of innocence. It’s useful to acknowledge, if only by reference to logistics, the selectivity of international courts, and the unease that only a few individuals from among a potentially huge cast in any scenario are being prosecuted. It’s also helpful to flag up, how, since an accused may have been quite remote or detached from the physical perpetration of crimes, the appropriate interpretation and application of the various modes of liability will be crucial to the outcome of a case.

Last week I asked LLM/MA students to read the ICC’s August 2017 Arrest Warrant, and subsequent statements made by the OTP, in the case against Mahmoud Al-Werfalli in the situation in Libya. It seemed a useful first case to review in a new module since it was both topical and atypically straightforward: the accused was charged as a physical perpetrator of murder as a war crime, so no need for convoluted engagement with indirect coperpetration or the contextual elements of crimes against humanity. Considering the executions in question had been recorded and videos of them posted online, and the accused having been detained then released by his superiors, this could be regarded as having been as straightforward a prosecution as the OTP would get.

To be clear, the paragraph continues in the next sentence to note that the Chamber ‘therefore finds reasonable grounds to believe that Mr Al-Werfalli bears individual criminal responsibility as a direct perpetrator’, while the summing up declaration notes ‘alleged criminal responsibility’. The OTP’s statement following issuance of the warrant clearly asserts: ‘Mr al-Werfalli is presumed innocent until proven guilty and the burden is on my Office to prove that he is guilty of the crimes we allege he committed. My Office can only discharge that burden if Mr al-Werfalli appears before ICC judges.’

Previously, in providing students with examples of the type of legal reasoning which would result in their struggling to pass a module, I reached for former Prosecutor Ocampo’s July 2010 Guardian piece on the Arrest Warrant for Al Bashir. While the entire proceedings revolved around the meaning of ‘reasonable grounds to believe’, Ocampo falsely asserted that a man who had never been brought before a judge, had been found by the ICC to be ‘deliberately inflicting on the Fur, Masalit and Zaghawa ethnic groups living conditions calculated to bring about their physical destruction.’

Much has been made of the purpose of proceedings before the ICC’s Pre Trial Chambers, tending towards the consensus that while crucial, this particular stage should not be understood as a mini-trial. Introducing a case such as that against Al Werfalli, where the evidence against him is so glaringly odius and obvious, should be the perfect opportunity to illustrate, as per the OTP’s statement above, that the man remains innocent until proven otherwise. It’s difficult, when introducing students to the study of international criminal law, to have to somehow try and explain how it is that ICC judges, in drafting this Warrant, could, to such a degree, appear to violate that fundamental principle of criminal law which is common knowledge to all laypersons.
Posted by Yvonne McDermott Rees at 09:00 No comments: