I’ve not been a very active blogger for the past couple of weeks. been exercising my rights under article 24 of the Universal Declaration of Human Rights (‘Everyone has the right to rest and leisure, including reasonable limitation of working hours and periodic holidays with pay.‘), vacationing in Canada with my grandsons. 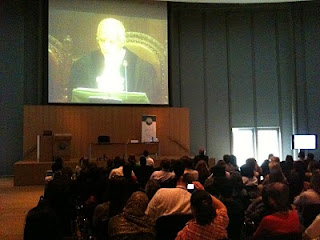 Just before I left, I was in The Hague lecturing at the Academy, which is located in the premises of the International Court of Justice. I didn't manage to have dinner with Lubanga, because the Trial Chamber of his release was suspended  by the Appeals Chamber.
By chance, I was at the Peace Palace when the Court issued the Kosovo advisory opinion. Space was at a premium in the Court itself and tickets were not available (although there seemed to be lots of empty seats). A crowd gathered in the adjacent building, where the videolink was broadcast of the reading of the opinion (see photo).
The Court has taken a very cautious approach to this very tendentious issue, ruling only that a declaration of independence was not prohibited by international law. It declined to pronounce itself on the greater issues of self-determination and rights of secession. My suggestion to students who are trying to understand what the Court did and did not say is to read the various individual and dissenting opinions. They put a rather flat opinion into three dimensions, providing us with a way to understand where the difficulties and the fault lines are to be found.
There have been some interesting developments at the international criminal tribunals. Here are a few of them:

• At the International Criminal Tribunal for the former Yugoslavia, the Appeals Chamber granted a prosecution appeal and ordered a new trial for Ramush Haradinaj. It is apparently the first time that a new trial has been order following an acquittal at first instance.

• Also at the International Criminal Tribunal for the former Yugoslavia, a Chamber opens an investigation into allegations of contempt of court directed against the former Prosecutor, Carla del Ponte

• At the International Criminal Court, a complaint is lodged by an NGO concerning the op-ed of Luis Moreno-Ocampo on the Bashir genocide decision (about which I made some comments in an earlier posting on this blog)

At the Extraordinary Chambers of the Courts of Cambodia, the first conviction was registered.against Kaing Guek Eav (alias Duch), who was the chief of Tuol Sleng prison under the Khmer Rouge regime. He was convicted of crimes against humanity and war crimes. It bears repeating that he was not even charged with genocide. This is another curious footnote in the evolving debate about the scope of genocide. For three decades, there has been talk of the ‘Cambodian genocide’. Yet in this historic conviction, the word does not appear. Duch was not charged with genocide, of course. We have an example of prosecutorial restraint based upon a sober reading of international law, in stark contrast to the extravagance of the Office of the Prosecutor at the International Criminal Court.
Duch was sentenced to 35 years in prison, of which five years were cut because of illegal detention for several years. Duch is also entitled to an 11-year reduction for time served since his arrest. That means that he has another 19 years to serve. Duch is currently 67 years of age.
There has been some consternation about this sentence, which some feel to be too lenient. In my view, it is very much in keeping with the norms of international law. Even if Duch had been sentenced to life imprisonment, he would be entitled to have the illegal detention as well as his time served taken into account. The result would probably be the same, in that he would have his detention reconsidered for purposes of release on parole after a certain number of years.
Duch’s trial was never in doubt because he confessed to the charges. He has shown remorse. The idea that such a man could be released when he reaches the age of eight-six, after having spent thirty years in jail, should not shock anybody.
Thanks to the many contributors who have alerted me to these decisions, including Dov Jacobs and Nilofar Sarwar.
Posted by William A. Schabas at 12:58