Michael D. Higgins is Candidate for Presidency of Ireland 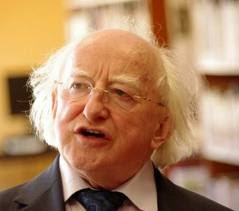 Amongst his many distinctions and accomplishments, Michael D. Higgins TD is an adjunct professor at the Irish Centre for Human Rights. Yesterday, Michael announced that he is seeking the nomination of the Labour Party for the Irish Presidency. He has given several interviews is which the elements of his unique candidacy are set out, including a piece in yesterday's local paper, the Galway Advertiser. Here is an excerpt:

Dep Higgins has always been an outspoken member of Dáil Éireann, speaking continually in favour of human rights, on Israel/Palestine, and in opposition to the so called ‘war on terror’. The President of Ireland, despite being the highest political honour and post in the State, is ironically meant to be ‘above’ politics, and is constrained in what s/he can say.

Given his passion for human rights and interest in international affairs, Dep Higgins is not someone who would be able to remain silent on such issues, or be blandly, and inoffensively neutral.

As such a Michael D presidency would be an ‘active presidency’, but does the role allow for that?

“I have looked in detail at the role of the president and there is scope within it to address issues such as in the area of culture, human rights, the future of Ireland,” he says, “and with my background in political science, I know what the role entails as well.

“I am an adjunct Professor at the school of Human Rights in NUI, Galway and there are many ways in which such issues can raised. I will be able to give my emphasis and analysis and offer people intellectual options to help break the cycle of fatalism.”