For the past two days, I have been attending the founding meeting, in , of the Regional Committee for the Prevention and Punishment of the Crime of Genocide, War Crimes and Crimes Against Humanity and All forms of Discrimination. The region is Great Lakes Africa. There are eleven member States, of whom eight sent representatives: Democratic Republic of the , (), , , , , and . 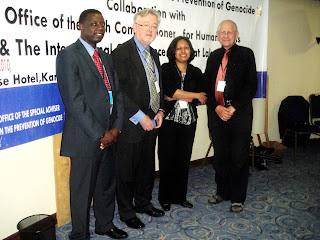 Yesterday, Professor Frank Chalk and myself, together with Norul Rachid and Castro Wesamba of the Office of the Special Adviser on the Prevention of Genocide, delivered a seminar entitled ‘A Framework for Genocide Prevention’. See the photo, from left, Castro, myself, Norul and Frank.

Today, the Committee adopted its Rules of Procedure and an action plan, and it elected its Bureau. The Committee agreed by consensus that Ambassador Balthazar Habonimana of shall be the President. The vice-president is Emily Chweya from and the rapporteur is Lucien Yaliki from the . The seat of the Committee will be .
The Committee’s establishment is mandated by the Protocol for the Prevention and the Punishment of the Crime of Genocide, War Crimes and Crimes Against Humanity and all forms of Discrimination. It was adopted on 29 November 2006 by the International Conference on the Great Lakes Region. The Protocol completes article 8 of the Pact on Security, Stability and Development in  the Great Lakes Region, adopted in December 2006. It says:

Protocol for the Prevention and the Punishment of the Crime of Genocide, War Crimes and Crimes against Humanity and all forms of Discrimination

a) To refrain from, prevent and punish, such crimes;

b) To condemn and eliminate all forms of discrimination and discriminatory practices;

c) To ensure the strict observance of this undertaking by all national, regional and local public authorities and institutions;

d) To proscribe all propaganda and all organisations which are inspired by ideas or theories based on the superiority of a race or a group of people of a particular ethnic origin, or which try to justify or encourage any form of ethnic, religious, racial or gender based hatred or discrimination.

I made a passing reference to this in the 2nd edition of my book Genocide in International Law (at p. 477), but now it certainly deserves a more ample treatment.
At today’s meeting, Professor Andrea Bartoli, of , who is also in attendance, spoke of the historic significance of the creation of the Committee. For many years, the absence of a committee or treaty body to monitor enforcement of the Genocide Convention has been lamented. In a sense, establishment of the position of Special Adviser on the Prevention of Genocide was a step in this direction. Now we have a full-fledged Committee. And though it has limited geographic scope, it is in an important region, one which has known genocide in the past and where the concerns about prevention are palpable and genuine.
Each of the member States is expected to create a national committee on genocide prevention. The aim of the work plan is to set up five such committees within the next year or so.
There are some other important components in the activities of the International Conference on the Great Lakes Region. A regional observatory for human rights is currently being established in . Its funding comes from the UN Voluntary Fund for Technical Cooperation in Human Rights. The Office of the High Commissioner for Human Rights has played a central role in organizing and coordinating these activities.
Posted by William A. Schabas at 17:08