Yesterday evening, in Dublin, Ireland's Foreign Minister Micheal Martin officially launched the report on Crimes Against Humanity in Western Burma: The Sitation of the Rohingyas, which has been prepared by the Irish Centre for Human Rights. 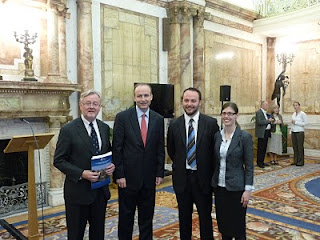 From left, myself, Minister Martin, Joe Powderly and Nancie Prud'homme.
Speaking at the launch of the Report, Minister Martin commended the work of the NUIG research team, stating that they have presented ‘compelling and credible evidence suggesting that crimes against humanity have indeed been committed by the Burmese authorities against the Rohingya minority group’. Noting the recommendation in the Report that the Security Council establish a Commission of Inquiry to determine whether there is a prima facie case that crimes against humanity have been committed, as well as similar recent comments by UN Special Rapporteur on Burma, Tomás Ojea Quintana, Minister Martin said that he fully supported these calls for all such alleged crimes to be formally investigated.
The Report is based on extensive open-source research and on a fact-finding mission to Burma, Thailand and Bangladesh conducted by experts in international criminal investigation. As well as interviewing organisations working in the region, investigators met with Rohingya victims in and around refugee camps in Bangladesh. The Rohingyas’ plight has been overlooked for years and the root causes of their situation still remain under-examined. The Irish Centre for Human Rights’ Report identifies and discusses some of these causes.

The team that prepared the report was headed by Nancie Prud'homme and Joe Powderly
Here is the press release.
Posted by William A. Schabas at 07:13

The other side of the story!