Extraterritorial Use of Force Against Non-State Actors, by Noam Lubell 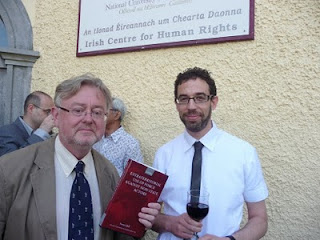 Last week at the Irish Centre for Human Rights, in conjunction with our annual summer course on the International Criminal Court, we launched Dr Noam Lubell's book Extraterritorial Use of Force Against Non-State Actors, which is published by Oxford University Press.
Noam has been a member of our faculty for three years. The book is based on the doctoral thesis he defended at the University of Essex.
It is divided into three parts, each devoted to a distinct body of law: the law of the use of force, international humanitarian law, and international human rights law. It explains how each area of law contributes its own perspective and its own solutions to this issue, which is of great contemporary significance. As Noam explains, the issue goes right back to the famous Caroline case, which involved Canadian rebels (today we would call them non-state actors) who were fighting the British colonists from the American side of the Niagara River. As I told Noam at the launch, I went to high school literally around the corner from where the rebels actually met to organize their struggle, at Montgomery's Tavern in North Toronto.
Today, the manifestations of this complex problem include the Taliban in Afghanistan, the Gaza flotilla and the Lord's Resistance Army in Sudan and the DRC, to mention only a few examples. Hat's off to Noam, for this very significant book. It immediately takes its place as the standard work on the subject.
Posted by William A. Schabas at 16:53