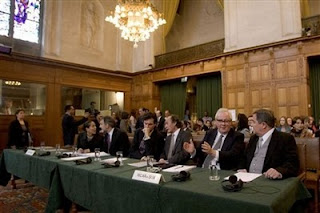 The great British international lawyer, Ian Brownlie, died a few days ago in a car accident while vacationing in Egypt. His name is a household word for international law students. His manual on public international law, first published in the mid-1960s (http://www.oup.com/us/catalog/general/subject/Law/PublicInternationalLaw/GeneralPublicInternationalLaw/?view=usa&ci=9780199217700), and his collection of documents on international human rights law, are on all of our bookshelves and are consulted regularly. Ian is the second from the right in the photo, taken at the International Court of Justice when he was arguing the Nicaragua-Honduras case for Nicaragua.
Among Ian’s distinctions: he was elected three times to the International Law Commission (stepping down in 1998), he acted in many of the biggest cases at the International Court of Justice, he was a member of the Institut de droit international, and he was knighted in 2009 ('for services to public intenrational law').
There is a brief biography available: http://en.wikipedia.org/wiki/Ian_Brownlie. I could not find his date of birth, but would guess that he was in his late seventies at the time of his death. He once described to me living through the Nazi bombings as a boy growing up in Liverpool during the Second World War
I got to know Ian when I was a visiting fellow at All Souls College in Oxford, in 2008. He had been Chichele professor at Oxford for many years (the position is now held by Vaughan Lowe), but he objected when I described him as a professor, insisting he was now a barrister at Blackstone Chambers in London. Still, when his offices in London were being renovated, Ian spent several weeks at All Souls, where he clearly enjoyed the tranquility and the scholarly atmosphere. We often had tea together in the college’s smoking room (where smoking is now prohibited) and chatted about the genocide case at the International Court of Justice, where he acted for Serbia.
In December 2009, he was one of a group of international lawyers who wrote a legal opinion on the issue of exhaustion of local remedies by civilians in an occupied territory, an issue that arises in ongoing litigation between Cyprus and Turkey. The opinion can be found on the website of the Government of Cyprus: http://www.law.gov.cy/Law/lawoffice.nsf/All/2876FCC26DB2D5DCC22576A400276B95?OpenDocument.
Posted by William A. Schabas at 06:18