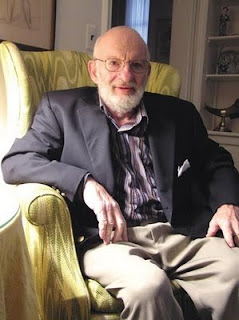 Richard Sonnenfeldt, who played an important role in the Nuremberg trial, has passed away. Students of mine hwo have seen the film Nuremberg: The Nazis Faced with their Crimes, may remember the interview with him.
Richard Sonnenfeldt was born in Germany in 1923, a Jew and, at various points, a refugee from Nazism, a young student in England, an 'enemy alien' interned in the United Kingdom, a refugee in Australia and India, an immigrant to the United States, an engineering student, a U.S. citizen, an American soldier fighting in Italy and Germany, an Office of Strategic Services interpreter, the chief interpreter, a key interrogator and a very central player on the U.S. prosecution staff at Nuremberg. For his obituary in the New York Times: http://www.nytimes.com/2009/10/13/nyregion/13sonnenfeldt.html?scp=1&sq=richard%20sonnenfeldt&st=cse. His 2007 interview with Charlie Rose: http://www.charlierose.com/view/interview/8475. The 'Jackson List' post by John Q. Barrett: http://www.stjohns.edu/media/3/cf01f851490643c6b0e6e331a781462e.pdf.
Also, 2003 and 2004 Jackson Center interviews with Richard (near bottom, under “Other Nuremberg Trial Participants”): http://www.roberthjackson.org/Center/videolist/.
Thanks to John Q. Barrett.
Posted by William A. Schabas at 20:18