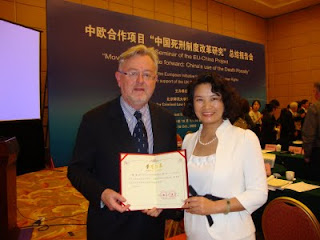 I was in China on the weekend, attending the final seminar of the EU-China Project on capital punishment, and attending the launch of the International Research Centre on Death Penalty Reform, which will be hosted by the law school of the Beijing Normal University. The meeting was attended by many senior judges, government officials and academics.
The photo shows my colleague Huang Fang, who is a professor at the Law Institute of the Chinese Academy of Social Sciences. She recently received a prestigious award for the publication of a translation of my book Introduction to the International Criminal Court.
The seminar brought out all of the contradictions in the ongoing debate about the death penalty in China. On the one hand, there is more writing, publishing and research activity on the subject than ever before. Moreover, it is obvious that views continue to evolve, and that there has also been a substantial drop in the use of capital punishment in the last few years. At the same time, many Chinese experts cling stubbornly to the idea that there is great support among the people, and that the government cannot go ahead with reform until this changes.
Our colleagues at Wuhan University, together with the Max Planck Institute in Fribourg, produced a detailed public opinion survey whose results were presented during the weekend meeting. These results were analysed by Professor Roger Hood, professor emeritus of criminology at Oxford, who explained that they should encourage moves towards abolition. According to Professor Hood, the results demonstrate that there is a majority in support of capital punishment only for the crime of murder, and that there are many other indications in the survey showing that the people of China are far less enthusiastic about capital punishment than their leaders claim. In fact, the survey shows that there is much greater support for the death penalty among the professionals in the system than among the ordinary population. Professor Hood says this is a case of those engaged in the system trying to justify what they do.
The new International Research Centre in Beijing is headed by a dynamic senior scholar, Professor Zhang Bingzhi, and we hope it will continue to lead the debate within China. Professor Hood, Professor Hans-Jörg Albrecht of Max Planck, myself and others will be involved with the Centre in an advisory capacity.
Posted by William A. Schabas at 12:05

Very interesting, Professor Schabas! Also, very encouraging to hear of this. I am an enthusiastic reader of your blog, for this very reason - it is a great place to hear of such developments!

It is interesting to note that recently, a report came out in the US showing that 57% of police chiefs do not think that the death penalty reduces violent crime! The report also shows that, since the late 1970s, the death penalty has cost the US over $2 billion dollars MORE than what life in prison would have cost. See more at: http://livingtheeuropeandream.blogspot.com/2009/10/in-jail.html

Thank you for your interesting post about the launch of the International Research Centre on Death Penalty Reform.

I was wondering, as I am interested in the field of Politics, what you think about the statement that big changes in the legal system are often coupled with political and social change. The results of these changes are difficult to foresee and may lead to severe problems.

What kind of problems do you think may occur in the PRC?

Many institutions limit access to their online information. Making this information available will be an asset to all.
Paper on Research