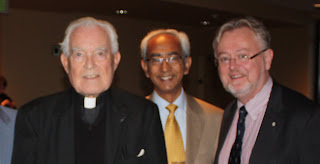 This past weekend, a group of lecturers and doctoral students from the Irish Centre for Human Rights met with our colleagues at the Centre for Civil and Human Rights of the University of Notre Dame, in South Bend, Indiana. It was the first of what we plan as an annual meeting of the two Centres. The purpose is to discuss and debate emerging issues and developments in human rights in a relatively unstructured and collegial manner. We are already planning next year's event, to take place in Galway on 16-18 October. Our hope is to enlarge the circle beyond our two institutions, and that academics, officials, journalists and activists who are interested in human rights will join us for these meetings.
This year's exchange heard presentations on post-conflict justice in Rwanda, the Obama administration's record on counter-terrorism measures, the influence of the Universal Declaration of Human Rights, legal issues concerning the use of combat drones, the abolition of the death penalty and the record of the ad hoc international criminal tribunals. A bit eclectic, but that was always the general idea. Presenters include Doug Cassel, Mary-Ellen O'Connell, Steven Smith, Shane Darcy, Ximena Medellín, Meg de Guzman, Jimmy Gurule, Gerald Gahima, Brian Farrell, Sean O’Brien and myself.
We were honoured by the attendance of Father Ted Hesburgh, founder of the Notre Dame Centre and former President of the University. The photo shows Father Hesburgh with Dr Vinodh Jaichand, deputy director of the Irish Centre (middle) and myself.
We're grateful to our hosts at Notre Dame for a fabulous weekend, and hope we can be as courteous when they visit us next year.
Posted by William A. Schabas at 15:36