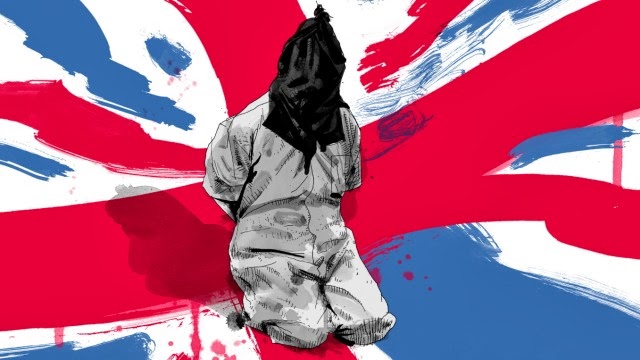 The European Centre for Constitutional and Human Rights and Public Interest Lawyers have filed a communication with the Prosecutor ofthe International Criminal Court concerning war crimes committed by British soldiers in Iraq.
Eight years ago, the previous Prosecutor of the International Criminal Court rejected communications concerning British conduct in Iraq. He cited the relatively small number of allegations as an indication that the situation was not of sufficient gravity. There was also the suggestion that the British justice system would adequately address the allegations.
The new communication shows that the numbers of violations are much larger than those considered by the Prosecutor in 2006. Hundreds of examples of prisoner abuse, including several murders of persons in custody, are documented in the submission. It also points to the inadequacies of the British justice system in bringing those responsible to justice. There have been public inquiries in the United Kingdom as well as out of court settlements for the victims, who have in some cases been successful at the European Court of Human Rights. But there is almost nothing in terms of prosecution before the criminal courts.
The communication to the Court insists upon pursuing this matter to higher levels of responsibility within the civilian and military hierarchy.
This communication is a test for the Court. It has shown great eagerness to deal with situations of serious violations of international law in African countries but considerable reluctance to proceed elsewhere. The Court offers a variety of rationalisations, none of them particularly convincing. The impression remains of a double standard, driven out of concerns that an investigation that touches on the interests of powerful countries is simply too ambitious for the young, fledgling institution. In the long run, however, a failure to address the challenges posed by situations like prisoner abuse in Iraq will cause great damage to the Court.
The report notes a pattern of prisoner abuse by British forces dating back decades, to the anti-colonial struggles in Palestine, Cyprus, Kenya and many other countries. In the early 1970s, Ireland took the United Kingdom to the European Court of Human Rights about ill treatment of prisoners in Northern Ireland. At the time, the Prime Minister and the Attorney-General both pledged that such methods would be abandoned. But it seems the British army didn't destroy the manual on how to torture detainees. They only put it back on the shelf. When the United Kingdom invaded Iraq in 2003, the British authorities dusted off their old copy of the torture manual and went back to their old tricks.
There was much media coverage and commentary on the submission to the International Criminal Court. See, for example, the op-ed by Clive Baldwin of Human Rights Watch in the Independent: “Time to Properly Investigate UK War Crimes in Iraq”.
Also:
Chantal Meloni in Opinio Juris: “Can the ICC investigate UK higher echelons’ command responsibility for torture committed by the armed forces against Iraqi detainees?”.
Marc Kersten: Iraq’s long shadow of injustice haunts Britain, Foreign Policy, 15 January 2014
The Independent: Exclusive: Devastating dossier on ‘abuse’ by UK forces in Iraq goes to International Criminal Court, 12 January 2014
The Guardian: British politicians and generals targeted in Iraq abuse case, 12 January 2014
Sky News: Iraq: Government Rejects Torture Allegations, 12 January 2014
Russia Today TV: 'Beatings & Burning': Dossier accusing UK of Iraq war crimes goes to ICC, 13 January 2014
Süddeutsche Zeitung: Anzeige wegen Folter während des Irak-Kriegs. Britische Soldaten sollen Kriegsverbrechen begangen haben, 10 January 2014
Das Erste: Großbritannien: Folter im Irak (Weltspiegel), 12 January 2014
FAZ: Großbritannien und die Foltervorwürfe: „Britische Streitkräfte sind die besten der Welt“ , 13 January 2014