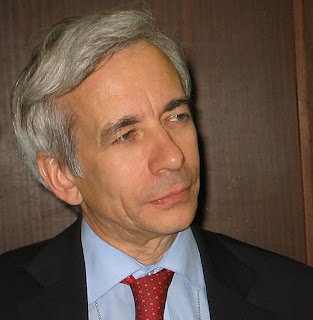 He made an immense contribution and his loss is greatly felt by his many friends and colleagues, among whom I count myself. Christopher and I first met in 1995 at a debriefing for the Amnesty International International Secretariat on the hearing of the South African Constitutional Court in the Makwenyane case, which led to judicial abolition of the death penalty and which I attended on behalf of the organisation. We worked together often over the years.
In the buildup to the Rome Conference, Christopher wrote a series of policy papers, entitled ‘Making the Right Choices’, that did a huge amount to frame the debate during the negotiations. He was regularly sought out by the diplomatic participants because of his enormous grasp of the legal issues. But his expertise, which all acknowleged, was constantly informed by his commitment to fundamental human rights.
Many of his old friends from Amnesty International were present at the London service yesterday. Ian Martin, Nigel Rodley and Wilder Tayler all spoke eloquently about his work and fondly about his friendship. (See also Nigel Rodley’s obituary in the Guardian).
Our condolences go to his family, and especially to his wife Françoise and his two young children, Olivia and Catriona.