Remembrance Day is an occasion to think about the importance of peace. It commemorates the end of the First World War, which lasted four years and resulted in the deaths of an estimated 20 million people. It was followed barely twenty years later by the Second World War, which caused the death of an estimated 65 million people.
These figures are difficult for us to comprehend today. Consider that this means an average of about 23,000 deaths every single day over the ten years of the two conflicts. Also bear in mind that in the first half of the twentieth century the population of the globe was about 30 to 35% of what it is today. In other words, in equivalent 2012 numbers, there were about 70,000 deaths daily.
That is more than double the number reported to have died in the Syrian conflict since February 2011. This is not to suggest that the number of killings in Syria is not appalling, merely to put the overall amount in perspective. 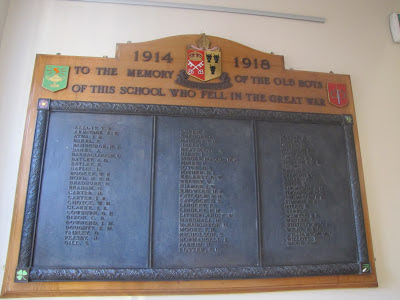 The point – something Stephen Pinker has made so eloquently in his book The Better Angels of Our Nature – is that the world is less violent than in was. The likelihood of dying a violent death continues to decline, even if there are still parts of the world that are very dangerous indeed.
Why is this? International law has made an important contribution. The Charter of the United Nations prohibited resort to force to settle disputes. The judgment of the International Military Tribunal recognized crimes against peace to be an international offence.
Very recently, after some hesitation, the States Parties to the Rome Statute completed the necessary codification of the crime of aggression. When the amendments enter into force in 2017 the International Criminal Court will be able to prosecute the crime of aggression. This is an important process that fits squarely within the progressive law making of the past 65 years aimed at the prohibition of war.
Peace is fundamental to the protection of human rights. Freedom from fear is the fourth of Roosevelt’s famous four freedoms. Unfortunately, the place of the right to peace within human rights law is still contested.
Recently, I was contacted by a former high school friend who is organising a reunion of the class of 1968. He sent me a list of those I was at secondary school with, and I was saddened to see that several of them had passed away. Perhaps ten out of 230. Contrast that with the schools attended by my parents and my grandparents, where an entire generation was decimated by world war.
The photo shows a plaque that was unveiled last week in the Cooper Gallery, in Barnsley, Yorkshire. The building once housed Holgate Grammar School, where my maternal grandfather and his brother went to school. Seventy-five of the boys lost their lives in the First World War, including my great uncle Duncan Fairley, whose name is on the plaque. Duncan was a second lieutenant who was fatally wounded on the morning of 1 July 1916, the opening day of the Battle of the Somme, in northern France. That day, the British army suffered 60,000 casualties, the largest in its history, as waves of young men, my great uncle among them, marched across the muddy fields to be mown down by artillery and machine gun fire. I am grateful to Sally Hayes for the photograph.