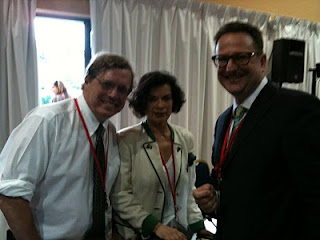 David Scheffer, left, with Bianca Jagger and Andrew Clapham at the Kampala Review Conference
David Scheffer, the former (and first) United States Ambassador at Large for War Crimes Issues has written a wonderful op-ed in today's International Herald Tribune on the outcome of the International Criminal Court’s Review Conference.
David’s voice is very important not just as a former American diplomat but also as a an academic. He is professor of human rights at Northwestern University in Chicago. I join David, and other academics like Andrew Clapham of Geneva and Roger Clark of Rutgers, in welcoming the amendment of the Rome Statute to incorporate the crime of aggression.
Professor Scheffer was a regular contributor to my blog on the Kampala Conference and his perceptive articles on the negotiations provide a fine insight into the process of adoption of the amendment.
Posted by William A. Schabas at 06:28