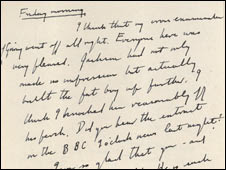 Letters from Nuremberg prosecutor David Maxwell Fyfe, thought to be lost, have been made public at the Churchill Archives Centre in Cambridge: http://news.bbc.co.uk/2/hi/uk_news/7953246.stm. Maxwell Fyfe describes defendant Hermann Goering as ‘the fat boy’ and claims he ‘knocked him off his perch’ in cross-examination. Many observers, including Telford Taylor, have written that Goering actually got the better of the American prosecutor, Robert Jackson. According to Maxwell Fyfe’s letter to his wife: ‘I think that my cross examination of Goering went off all right. Everyone here was very pleased. Jackson had not only made no impression but actually built up the fat boy [Goering] further. I think I knocked him reasonably off his perch.’ (see photo)
Another recent personal account of Nuremberg comes from the letters of Thomas Dodd, which were recently edited and published by his son, a US Senator: Letters from Nuremberg, My Father’s Narrative of a Quest for Justice. I read recently that Senator Christopher Dodd has a house in Connemara, somewhere near Roundstone, and visits it regularly.
Thanks to Christopher Ryan.
Posted by William A. Schabas at 06:55