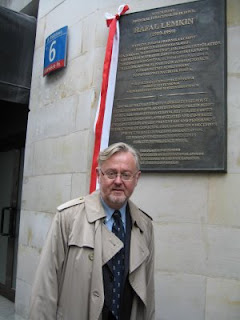 Raphael Lemkin was the Polish Jewish international lawyer who invented the word 'genocide'. Born in 1900 in what was then called Eastern Galicia (and which is now Ukraine), not far from where my paternal grandparents came from, Lemkin studied law with some of the great Polish legal academics of the time. He first worked as a prosecutor and then practised law in Warsaw during the 1930s, while developing a profile in international criminal law circles. In 1939 he managed to escape Poland and made his way to the United States, where he wrote his seminal work Axis Rule in Occupied Europe, one of whose chapters is entitled 'genocide'. Lemkin became a tireless activist, lobbying at the United Nations for the Genocide Convention. Following its adoption, on 9 December 1948, he continued to campaign for ratification and domestic implementation until his death in 1959.
He is virtually unknown in his native Poland. The Polish Institute of International Affairs is hosting a conference right now, one of several such gatherings being held in the coming months to commemorate the 60th anniversary of the adoption of the Genocide Convention. Yesterday, they unveiled a plaque at Lemkin's home in central Warsaw, and I had the privilege of being present at this important event. The apartment is at 6 Kredytowa Street, about two blocks from the perimeter of the Warsaw ghetto where half a million Jews perished. Had Lemkin lingered a few more weeks in Warsaw, he would surely have suffered the same fate.
The map of Warsaw I was given at my hotel has a whole section on it devoted to sites of 'Jewish Heritage'. This is quite a change from the first time I came here some fifteen years ago, when Warsaw's Jewish past seemed largely ignored. Then I remember asking the hotel concierge how to get to the Warsaw ghetto monument, and he just shrugged his shoulders, saying he had never heard of it. I got similar responses from taxi drivers, and could find nothing in local guide books or tourist maps. I eventually found the monument on my 1993 visit, and went back there again yesterday to pay my respects. Now there is a large sign indicating plans to build a museum of Jewish life in Warsaw.
Yesterday I also visited the famous Pawniac prison in Warsaw, where the Nazis held and murdered tens of thousands of political opponents. One of the exhibits shows the cover of a book issued by the Polish government in exile in December 1942, and published by the London publishing house Hutchison, entitled The Mass Extermination of Jews in German Occupied Poland. So much for the argument that the great powers only learned of the genocide in late 1944 and early 1945.
Posted by William A. Schabas at 07:55