As we reflect on Nelson Mandela’s life, especially his courage, determination and dignity, a few modest words might be devoted to how this great man added to the development of ideas. Among many important facets of his contribution, two stand out for special attention.
First is the centrality of racial equality. His life places the movement to end racial discrimination as one of the most important themes, possibly the most important, in the progress of human thought.
The claim that one race is superior to another is a most noxious and destructive notion, but it is one that has afflicted humanity for several centuries, like a lingering disease without a cure. It was the underpinning of such atrocities as chattel slavery and the slave trade, but also of colonialism, and of Auschwitz. And, of course, of apartheid. 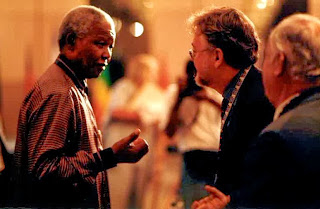 In 1948, South Africa abstained in the vote to adopt the Universal Declaration of Human Rights because its delegate had choked on the opening words of article 1: ‘All human beings are born free and equal in dignity and in rights.’ But South Africa was not the only country at the time with a form of legal apartheid. It was not the only country to deny the noble principle of equality, despite the words of the Universal Declaration.
Early in the history of the United Nations, racial discrimination was placed at the centre of human rights initiatives. This was manifested in the first great treaties: the Genocide Convention, in 1948, and then the International Convention for the Elimination of All Forms of Racial Discrimination, in 1965. Initial inroads in the historic resistance of the United Nations to genuine intervention in domestic human rights matters came from the pressure of newly freed states in Africa and elsewhere to compel the organisation to deal with South African racism. It is sometimes forgotten that it was the south, not the north, that began to push human rights up the agenda of the United Nations.
When Nelson Mandela was born, 95 years ago, racism featured in the policies of many if not most states in the world. Think of Jim Crow in the United States, residential schools in Canada and Australia, King Leopold’s Ghost in central Africa, to mention only a few examples. Within months of Mandela’s birth, as the new League of Nations was being constructed, Japan proposed a resolution condemning racial discrimination. It was rejected, apparently vetoed by President Woodrow Wilson. Today, the man who occupies Wilson’s old office is one of the great contemporary symbols of, as well as an eloquent voice for, racial equality.
It is premature, perhaps, to say that racism is a thing of the past. It lingers on in many ways and forms. But the progress over the past century has been immeasurable. In the span of this great man’s life, racism went from being accepted policy, enshrined in law, to an international prohibition whose stigma no State can now bear. Many great individuals deserve credit for this, but perhaps they should remain nameless for a few more days as a tribute to the greatest one of them all.
Nelson Mandela’s other important contribution is in the area of what is called ‘transitional justice’. There are reports, studies, UN resolutions, doctoral theses and countless books and articles on the subject. Mandela delivered what others talk about. His gamble was that justice might be tempered in order to ensure a transition without unbearable violence. Two decades later, South Africa, despite its many problems, remains at peace.
Three years ago, at the Kampala Review Conference of the International Criminal Court, some speakers said that ‘amnesty is no longer an option’ and that ‘amnesty is off the table’. Nobody explicitly condemned the South African model of transitional justice, but the implication is obvious. Indeed, I have often heard conference speakers insist that because of the contemporary commitment to prosecution of those responsible for heinous crimes, a South African-style transition is no longer viable.
But Nelson Mandela never renounced the approach he took to transitional justice. Of course there were those in South Africa who were unhappy about the amnesty provisions. Some victims could claim legitimately that they had not received full justice. Mandela’s profound understanding was that justice should not trump peace.
His message, despite many pronouncements to the contrary in academic, judicial and political circles, has been broadly accepted. If this were not the case, we would expect to see attempts by hyperactive prosecutors in European countries to prosecute South Africans under universal jurisdiction for the crime against humanity of apartheid, and to take legal and political action against South Africa for failing to honour its international obligations to prosecute the crime. But there has been nothing of the sort. Mandela did not deliver a Pinochet-style self-amnesty, but it was an amnesty nevertheless, and it led to ‘impunity’. One of the great crimes against humanity of the twentieth century has gone essentially unpunished. Yet nobody is clamouring to change this. That is because of our immense respect for the path that Nelson Mandela identified.
Some years ago, the International Committee of the Red Cross published a study that suggested there should not be an amnesty for international crimes. It said this was ‘a norm of customary international law’ established by ‘State practice’. In the discussion of this point, Nelson Mandela was not mentioned. His practice in the South African transition, as well as that of the many States that have accepted the South African approach without objection, obviously stands for the opposite point of view. Ultimately, Mandela’s flexible and nuanced understanding of the relationship between peace and justice is so much more productive than the inaccurate claims in some quarters that amnesty is unlawful or, at the very least, that it should always be rejected by peacemakers.
Mandela has helped humanity to think differently. Perhaps that is his greatest legacy.

It does seem absurd that the example of South Africa is rarely cited, indeed apparently largely forgotten, as a model for peaceful transition. Different situations will require different processes, and I wonder whether the relative success in this situation was at all due to the personality of Mandela who, after 27 years in prison, had become an authority on morality. I'm also interested in where and when the photo was taken - what was it like to meet the man?