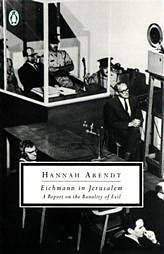 The trial of Adolf Eichmann began on 11 April 1961. It was an event of great legal importance. The Israeli courts interpreted and applied the provisions of the 1948 Genocide Convention for the first time.
There is a huge secondary literature on the trial, of which Hannah Arendt's Eichmann in Jerusalem is certainly the most famous contribution. A new study of the trial by Deborah Lipstadt, The Eichmann Trial, has just been published, as well as the English translation of a book on the trial that was first published in Dutch in the early 1960s, Criminal Case 40/61, the Trial of Adolf Eichmann by Harry Mulisch. A book published in Germany this week claims Eichmann tried to surrender to German authorities - who knew where he was as early as 1952 - in 1956.
Films of the entire trial are being uploaded onto Youtube by the Yad Vashem Museum. Here is the link to the English language version, some 400 hours of them. For the transcripts, click here. For something more concise, see the film by Eyal Sivan, The Specialist.
The two judgments, of the District Court of Jerusalem and the Supreme Court, are available here.
Thanks to Douwe Sikkema and Joe Powderly.
Posted by William A. Schabas at 23:34

You can find the DVD of the documentary film "The Specialist" on our website:
http://www.momento-films.com/en/catalogue/?greyAtabs=3#f-3

A few months ago, the Law Students Society at Birkbeck had a viewing of and discussion about "The Specalist". I have reviewed it here: http://andreasmoser.wordpress.com/2010/12/18/film-review-the-specialist-eichmann/ (includes the trailer to the film)