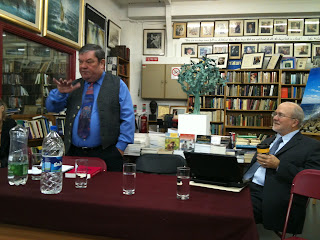 Des Kenny speaking on censorship in Ireland during the 1950s, while Prof. Doug Cassel looks on, during yesterday morning's session at Kenny's Bookshop
Over the past two days, we have held the second annual Irish American Exchange on Human Rights with our colleagues from the University of Notre Dame. Yesterday, we met at Kenny's Bookshop, a Galway institution, where several speakers looked at literary themes and their relationship with human rights. Sean O'Brien spoke about Oscar Wilde's contribution to prison reform, and Mary Ellen O'Connell began with Kurt Vonnegut's Slaughterhouse Five for a talk on jus cogens and the prohibition of attacks on civilians. Doug Cassel, director of the Notre Dame Centre on Civil and Human Rights, compared censorship case law in Europe and the United States. Des Kenny himself lectured on Irish censorship in the 1950s. Several of our doctoral students made presentations, including Rick Lines, Dang Heping and Eadaoin O'Brien.
The exchange provides us with an informal and relaxed occasion to exchange ideas about human rights law and practice, including new research that we are doing. We began the exchanges last year, with a weekend at the University of Notre Dame, and we will continue them next year. All are welcome, by the way, and we hope to broaden the circle beyond our two institutions so as to engage with all who would appreciate a stimulating two days of seminars on human rights.
Posted by William A. Schabas at 07:06