Roger Casement and Crimes Against Humanity 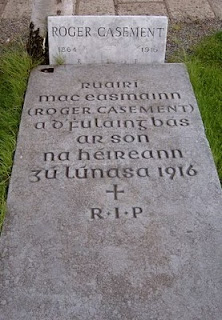 The concept of ‘crimes against humanity’, which now lies at the core of international criminal law, was first codified in the London Charter in 1945, which was the legal basis of the Nuremberg trial. It had been used in a diplomatic context 30 years earlier, when Britain, France and Russia, referring to what is now called the Armenian genocide, sent a message to the Ottoman rulers protesting ‘these new crimes of Turkey against humanity and civilization’.
The term seems to have been used in a more colloquial sense prior to 1915. In my book Genocide in International Law (2nd ed., Cambridge: Cambridge University Press, 2009, p. 20, note 15), I referred to the two examples that I knew of: in 1890, an African-American journalist, George Washington Williams, wrote to the United States Secretary of State that King Leopold’s regime in Congo was responsible for ‘crimes against humanity’ (see Adam Hochschild, King Leopold’s Ghost, Boston and New York: Houghton Mifflin, 1998, p. 112); in 1906, US diplomat Robert Lansing described the slave trade as a crime against humanity (Robert Lansing, ‘Notes on World Sovereignty’, (1921) 15 American Journal of International Law, p. 13 at p. 25).
Now we have a third example, from Irish humanitarian and patriot Roger Casement. I have to thank one of our doctoral students, Michelle Farrell, for this. Michelle stopped by the Strand bookstore in New York last week on her way back from presenting a paper at the International Studies Conference in New Orleans. She picked up a volume on Casement that referred to crimes against humanity, and that put her on the track for the actual references.
They appear in Casement’s Putamayo Journal (available on Google book in The Amazon Journal of Roger Casement, edited by Angus Mitchell), the diary he kept while conducting his humanitarian investigation into atrocities committed against the Putamayo Indians. Casement was posted as a UK diplomat to Brazil at the time, and was consular representative to the commission investigating rubber slavery in the Amazon region.
The references in the diary date to October 1910. On page 173: 'Besides, these men have never been punished for the most awful offences against humanity. Not one.' On page 178, Casement wrote of an Englishman’s defence of the company before the Peruvian Amazon Company Commission: 'This thing we find here is carrion - a pestilence - a crime against humanity, and the man who defends it is, consciously or unconsciously, putting himself on the side of the lowest scale of humanity...'
Casement’s diaries have themselves been shrouded in controversy. Parts of them recorded his homosexual activities with adolescents. When Casement faced the gallows in 1916 for his support of Irish independence, the references in the diaries were shown by the British to his supporters in order to weaken the campaign against his execution. It has long been argued that the so-called ‘black diaries’ were forged by British intelligence, but there now seems to be fairly general recognition that they are genuine.
Casement was hanged in Pentonville Prison, in London. The body was repatriated in 1965. He was given a State funeral and is buried in Glasnevin Cemetery in Dublin.
Thanks, again, to Michelle Farrell.
Posted by William A. Schabas at 13:22