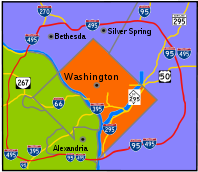 John Allan Muhammed, the so-called ‘Beltway sniper’, was executed last night: http://www.reuters.com/article/domesticNews/idUSTRE5AA0B620091111.In%202002
In 2002, he engaged in a perverse shooting spree with an adolescent accomplice that involved a sniper rifle in the back of a car. The two would shoot people at random. The expression ‘Beltway sniper’ described the fact that the crimes took place in and around the Washington beltway, which separates the federal District of Columbia from the states of Maryland and Virginia.
One the aspects of the case that has always fascinated me is the fact that the majority of the killings took place in Virginia and Maryland, where the death penalty was in force. All that these two men, who killed at random, needed to do to avoid the death penalty was to drive a kilometre or two and place themselves on the other side of the beltway. Because there is no death penalty in the District of Columbia.
When I describe this in lectures, someone always says: ‘But how would they know that? Killers don’t think of such things. They think they won’t ever be caught.’
And that is exactly my point. If the death penalty had a real deterrent effect, when compared with lengthy imprisonment (which would be the fate in the District of Columbia), the ‘Beltway snipers’ would be expected to make sure they were inside the beltway and not outside.
Demonstrating that the death penalty has no additional deterrent effect over lengthy imprisonment (or, for that matter, the contrary) is a difficult proposition. But it seems that in the Muhammed case, we have a good example, in at least one case, to prove the fallacy of the deterrence hypothesis.
By the way, the American Law Institute, which is responsible for the authoritative Model Penal Code, has just removed the death penalty from the Code: http://intlawgrrls.blogspot.com/2009/11/no-more-model-code-on-capital.html.
Thanks to Nadia Bernaz.
Posted by William A. Schabas at 07:11