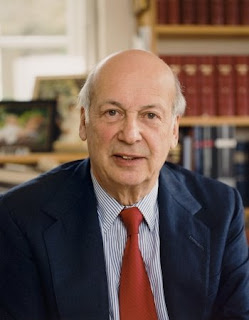 Sir Elihu Lauterpacht is one of the great international lawyers of our time. Joe Powderly has found a website with a series of interviews that he did earlier this year in which he reminisces about his life and work: http://www.squire.law.cam.ac.uk/eminent_scholars/professor_sir_elihu_lauterpacht_conversations_with_professor_sir_eli_lauterpacht.php. He is of course also the son of the great Sir Hersch Lauterpacht who can claim, amongst other accomplishments, to have told Justice Robert Jackson, over a dinner at Trinity College in July 1945, to rename the category previously known as 'atrocities, deportations and persecutions'. Lauterpacht's suggestion was 'crimes against humanity'.
This July, James Crawford organized a big event at the Lauterpacht Research Centre in Cambridge to mark both the 25th anniversary of the Centre and Sir Eli’s 80th birthday. It was a gathering of many of the great and the good in public international law from around the world, including several sitting and former judges of the International Court of Justice.
Eli Lauterpacht gave me my first break in international law when he was owner and publisher of Grotius Publications in Cambridge. I had completed my doctoral thesis on the abolition of the death penalty, and had sent the manuscript out to the leading publishers. Within a few weeks I had an offer from Eli Lauterpacht, whose small firm wasn't encumbered by the time-consuming bureaucracy of the bigger publishers, which of course I accepted. Later, the company was sold to Cambridge University Press, which has published the second and third editions. More than once I have told him of the great debt I owe him for this. Many others have similar stories of appreciation for Sir Eli.
Thanks to Joe Powderly.
Posted by William A. Schabas at 08:43