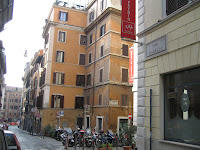 Since early January, Penelope and I have been living in Rome on the Via Rasella. I’ve been a visiting lecturer at the LUISS Guido Carli University, introducing a fine group of masters students to international criminal law. Our apartment is in a marvellous location in Rome’s centro storico, a few blocks from the Trevi fountain or, in the other direction, the Spanish steps and the apartment where Keats died. Almost every evening, we take a stroll, stopping literally around the corner for gelato at San Crispino. It is said to serve the best ice cream in Rome, which makes it the best ice cream in the known universe. My favourite flavours are pignoli and Sicilian honey. We leave Rome at the end of the week for the next sabbatical destination, All Souls College in Oxford.
Via Rasella is perhaps 150 metres long and quite narrow, climbing the slope of Quirinal hill to the Barberini Palace. I can see the entire length of the street from my apartment window. Romans know the Via Rasella as the site of a spectacular attack by partisans on Nazi troops, on 23 March 1944. A heavily armed column of the 11th Company of the 3rd Bozen SS Battalion, which had been formed to fight the partisans, was marching up the street. One of the partisans, disguised as a street sweeper, set a bomb in a rubbish bin that initially killed twenty-four people. His comrades fired upon what was left of the column, killing another nine.
From his ‘wolf’s lair’ in Poland, Hitler learned immediately of the attack, perhaps the most dramatic and ambitious challenge by anti-nazi partisans anywhere, and he ordered revenge that ‘would make the world tremble’. The nazis resolved to kill ten men for every victim of the attack. The following day, 335 men and adolescent boys, none of whom had any connection with the attack, were taken to the fosse ardeatine, a cave on the outskirts of the city, and murdered. Today, there is a very touching memorial that I have visited. There are hundreds of distinct tombstones indicating the names of the victims, and people still lay flowers on them. An important precedent about the illegality of reprisals was set in the trial of SS Lt. Col. Herbert Kappler, who was the nazi police chief in Rome and the man in charge of the summary executions (In re Kappler, (1948) 15 ILM 471). Much more recently, Italian courts prosecuted one of the main executioners, Erik Priebke, who had evaded justice for several decades. Priebke had fled to Argentina, but was extradited to Italy in 1996 after being exposed by American television.
Bullet holes from the attack are still quite visible on the building at the corner of Via Rasella and Via Boccaccio, as my photograph shows. They are most visible in the middle of the photo, towards the top, next to the sign of the Hotel Petris. If you click on the photo, it should enlarge, and you will see this better. Our apartment is next to the corner building with the bullet holes, slightly down the hill beside the Japanese restaurant. I suppose the SS company marched right by my front door, a minute or two before the bloodshed. Apparently the authorities won’t let the owner plaster over the bullet holes, for they are part of the city’s heritage. But there is nothing else to indicate the terrible history of that street corner, nor could I find anything about this in any guidebook.
Like many atrocities, the historiography of the Via Rasella attack and the ensuing massacre at the fosse ardeatine is as interesting as the narrative of the events themselves. There have been charges that the Pope knew of the executions ahead of time but did little or nothing to intervene with the nazi authorities. In 1996, a newspaper connected to the Berlusconi family published a revisionist account of the bombing that depicted the partisans a ‘terrorists’. In a trial that resulted, the Court of Cassation described the Via Rasella attack as a ‘legitimate act of war against a foreign occupying army directed at a military target’.
One of the mysteries of the reprisals was the odd number of victims. The Nazis claimed they killed ten Italians for every one who died on Via Rasella, but 335 were massacred at the fosse ardeatine, not 330. This was only explained in the Priebke trial. Kappler’s intelligence chief, SS Major Karl Hass, was believed dead, but Chief Military Prosecutor Antonino Intelisano tracked him to his retirement home, near Milan, and brought him back to Rome. When Hass testified, this exchange took place:
INTELISANO: It was discovered that the number of people killed was more than intended, five extra. Can you explain that to us?
HASS: [At the ardeatine,] Priebke was there with the copy of the list. He got the people down [off the trucks] and canceled out their names. At a certain point, one of the prisoners was not on Priebke’s list. At the end, in fact, there were five extra men. That was when Kappler said, ‘What do I do with these five? They’ve seen it all …’
Posted by William A. Schabas at 07:12

This account further shows the minds of men for what they really are. Human Rights and its regime must not be permitted to remain at the whim of every dictator/political group in power. We have various accounts to enable us judge events in history but have things REALLY changed? Will whatever evil anyone is capable of conceiving be prevented by the human rights regime as it stands or do we still have to take lessons after the horror! I think not, politics and economic gains would not permit that and of course, we would have history to judge us!

Thanks for writing this up, I am staying with my cousin across the street on Via Rasella looking at this building. He told me about the Nazi attack last night so I googled it and your post came up. Very cool!