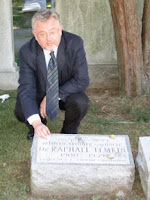 Raphael Lemkin first used the word 'genocide' in his book Axis Rule in Occupied Europe, published in 1944. He was one of three experts who prepared the first draft of the Genocide Convention at the request of the United Nations Secretariat. Lemkin died in 1959, apparently in poverty.

Today is a beautiful early autumn day in New York City. This morning, Don Ferencz and I drove out to Mount Hebron Cemetery in Queens, and paid hommage at Lemkin's grave. Don said an old Jewish prayer that was inspired by an early genocide, when Crusaders wiped out an Ashkenazi community. We both placed small stones on the grave, following the Jewish tradition.
The tombstone is of modest proportions, and sits among several others bearing the name Lemkin, as this is a family plot. There is some writing in Hebrew at the top. Don thinks it is Lemkin's name. The rest of the inscription reads: 'Beloved Brother and Uncle. Dr. Raphael Lemkin. 1900-1959. Father of the Genocide Convention.'

The Cemetery is about mid-way between New York's two airports. From Lemkin's grave you can see the site of the 1961 World's Fair.
Posted by William A. Schabas at 18:29