Reduction of Death Penalty in China through Judicial Restraint

This past weekend, I was in Beijing participating in the launch seminar of a major project entitled ‘Judicial Restraints on Application of the Death Penalty in China, under the auspices of the College for Criminal law Science of Beijing Normal University. Those in attendance were some of the most senior academics in the country in the field of criminal justice, judges from courts around the country and other professionals from the criminal justice system. I was honoured to be the only non-Chinese participant in the meeting.
Over two days, the conference discussed a range of measures aimed at significantly reducing the use of capital punishment in China. Although the purpose of the project is not to campaign for abolition of the death penalty, many speakers made the point that this is the ultimate objective and that judicial restraint is one means of achieving it. 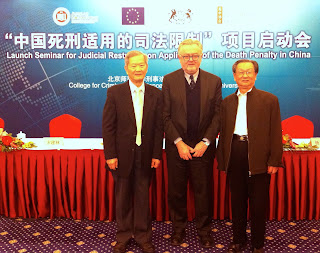 Speakers canvassed a range of techniques that could be used, including stricter evidentiary rules and a range of procedural measures. There was a recognition that such initiatives need to go on regardless of whether the applicable legislation in China is actually changed.
Speakers also expressed the need to have more precise information about the use of capital punishment. That total number of persons executed remains an official secret. However, after this meeting and many other encounters with experts in the Chinese criminal justice system, I feel confident in making a few very educated guesses. In the past year, China has probably executed about 3,000 people. This represents a decline of more than 50% from the number only five years ago. The vast majority of these executions are for homicide in one form or another, although China also uses the death penalty for a range of non-violent crimes including drug trafficking and corruption.
After more than a decade of participation in various conferences on capital punishment in China, I found this recent meeting to be the most encouraging event of all. Often, the sessions have a confrontational tone to them, with European experts lecturing Chinese colleagues, who inevitably feel defensive. But the recent meeting was an entirely Chinese affair, and I sat there quietly like a fly on the wall. It was a sincere and very productive exchange amongst the most senior Chinese experts in criminal justice about how to make dramatic reductions in the rate of execution.
On more than one occasion, speakers noted that the high rate of execution was an embarrassment to China at the international level. I have never before heard such candid comments. There seems to be a growing recognition in countries like China, where the death penalty is still retained, that the debate about capital punishment is over and that they are on the wrong side of history.
The project is led by the very dynamic dean of the College for Criminal Law Science of Beijing Normal University.
I’ve moved on from Beijing to Bangkok, where I am participating in a series of seminars on capital punishment in Thailand and in the region, including Singapore. A decade ago, Thailand was executing an average of 8 people per year, but since 2004 it has executed only 2 people. Singapore has also dropped dramatically in its use of the death penalty from very high levels more than a decade ago. The obsession in this part of the world is with the use of capital punishment for drug crimes.
Posted by William A. Schabas at 00:15