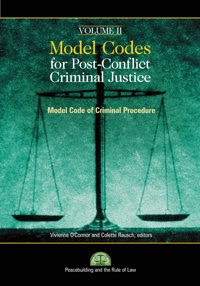 Since 2001, the Irish Centre for Human Rights has been the focal point for the development of the 'model codes' for post-conflict justice. Volume 2 has just been published by the United States Institute of Peace: http://bookstore.usip.org/books/BookDetail.aspx?productID=170810. The authors are Vivienne O'Connor, who received her doctorate last year at the Irish Centre for Human Rights, and Colette Rausch.
Posted by William A. Schabas at 08:38