Omar Khadr has been released from Guantanamo, where he has been detained for a decade, to serve the remainder of his sentence in Canada pursuant to a prisoner exchange agreement. When he was fifteen, Khadr was in Afghanistan fighting with the Taliban against the United States. There, he threw a grenade that killed an American soldier. In 2010, he pleaded guilty for doing this and was sentenced to an eight-year prison term.
Years earlier, nationals of the UK, Australia and other countries who had been detained were repatriated at the request of their governments. By contrast, Canada’s right wing government has refused to do anything to assist Omar Khadr, who was born in Canada and is a Canadian citizen. As early as April of this year, the US authorities indicated they were ready to repatriate Khadr. The Canadian government has been dragging its heels on bringing him home.
It is doubtful that a Canadian young offender, aged fifteen, would be sentenced to more than eight years in prison. Khadr has been in detention for a decade already anyway.
His crime has always been a bit of a mystery to me. There was (and is) an armed conflict going on in Afghanistan. Why is it a crime for a combatant on one side in the conflict to kill a combatant on the other side? And even if it is a crime, presumably it would be a crime under the laws of Afghanistan. Why then would someone be tried for this crime in Guantanamo and then serve his sentence in Canada? Khadr pleaded guilty as a result of an agreement, but he had little real choice. Without a plea deal, he might have much longer in Guantanamo.
Khadr should be released from detention in Canada as soon as possible. He is eligible for release sometime in 2013. This will be a matter for the country’s parole authorities, who we should presume will behave in a fair and objective manner, without the perverse political bias of the Canadian government authorities. If the Harper government had done its job, Khadr would already be a free man.
There remain 166 detainees in Guantanamo. Four years ago, Barrack Obama promised that if he were elected the notorious prison would be shut down.

On Thursday, the High Commissioner for Human Rights delivered a speech in conjunction with the United Nations General Assembly. Here it is:

Ministerial-level event on “The Death Penalty: From Moratorium to Abolition”

Posted by William A. Schabas at 08:27 No comments: 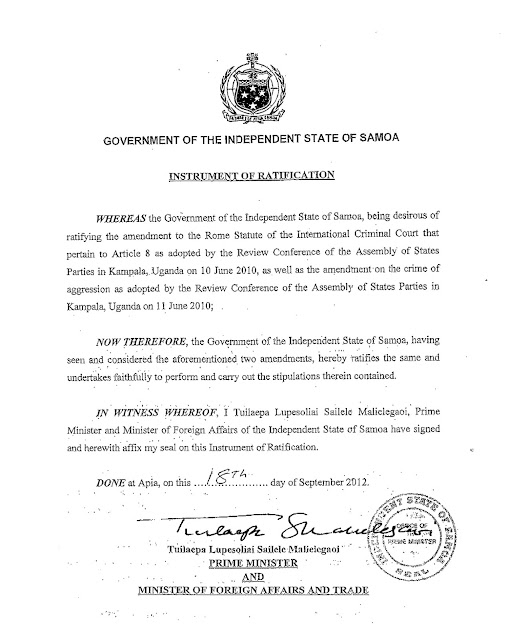 Tomorrow, Samoa will deposit this instrument of ratification at United Nations Headquarters, becoming the second State Party to the Rome Statute to ratify the amendment on the crime of aggression. A total of 30 ratifications are required for the amendment to enter into force. If this is achieved by 2017, the Assembly of States Parties will also be required to adopt a resolution by a two-thirds vote in order to fulfil the requirements for entry into force.
Posted by William A. Schabas at 17:12 No comments:

Human Rights in the Future

Dr. David Keane, Lecturer in Law at Middlesex University London and Yvonne McDermott, Lecturer in Law at Bangor University, in Wales, have published The Challenge of Human Rights, Past,Present and Future, with Edward Elgar Publishers. This is an edited collection that looks beyond the established limits of human rights, focusing especially on the directions that this discipline will take in the future.
The book consists largely of papers presented at the tenth anniversary celebrations of the Irish Centre for Human Rights, which took place in November 2010.
According to Professor Joshua Castellino, who is Dean of the School of Law at Middlesex University London:

This volume represents a genuine attempt to think beyond the realms of what exists, to reflect on ideas postulated in the past that could be of great salience in the future. It presents the reader with a key question: to what extent are the contemporary concepts of human rights and the systems that support them equipped to address the challenges of a changed world? By thinking through some of the ideas of the past, with a set of promising young scholars alongside more established names, readers will gain a sense of how human rights politics have shaped the current regime while also becoming attuned to the extent to which new directions and mechanisms can be forged in the future.